Today, we accomplished one of le beau’s dreams: off-roading in the mountains.

Where we live, off-roading is nearly impossible. In Colorado, however, land is nature’s bounty. A space for all to explore and revere. Over the course of 8 hours, we traversed 65 miles of mountain terrain in the alpine tundra, dotted with forests, lakes, canyons, and abandoned mines.

Last night, we drove from New Mexico to Colorado, but weren’t able to make it to the Airbnb. The sun had set. We were driving through dark mountains, nestled at an altitude of 10,000 feet. In the nearby mountain town, quaint and quiet, we called around for rates. This Grungy Lodge fit the bill.

We entered to a rambunctious, loose group of hipster-esque tattooed bar-goers. They greeted us casually. Welcomed us openly. Asked us questions with such fluidity that I peered suspiciously through my shades and wondered if the place was safe or not. (It was. Le beau was brilliant enough to leave the keys in the door – on the outside – the entire night, and we were fine.)

The hotel owner, David, gave us a tour. Told us how he bought the decrepit building 2 years ago and renovated it. Turned it into a tavern, bar, cafe and lounge area, all rolled in one. The balcony overlooked the mountains. Antiquities and wood furniture adorned the space. There were film cameras, typewriters, bookshelves, original staircases on display. With an old record-player in our room, we played vinyl records. Jazz.

In the morning, we stood on the balcony, munching on stale bagels and drinking fresh coffee. In the crisp and cold Colorado air, we drank up the view. We prepared to go off-road. After fiddling with his tires and getting gas, the off-roading adventure began.

Until we drove on a mountain shelf, I had never truly considered the nature of a shelf.  Then there I was, on a life-sized shelf, on a mountain, to boot, where one wrong turn could topple us to our end. There were no lanes. No markers. No rules. At any point, a Jeep or truck or biker would come hurtling down the opposite direction. One person would have to make the decision to duck into a shelf, or reverse towards a cliff, which we did.

By lunch, my palms of sweat had excreted all of the moisture from my body. Which explained why, at every terrifying truck crawl, where his truck petered up a steep cliff, I took an enormous gulp of water.

But the mountains were beautiful. Some were filled with green forestry, others were rocky orange, some a soft grey. We jostled onto more bumpy roads, towards the central city, where we ate convenience store sandwiches by a stream. 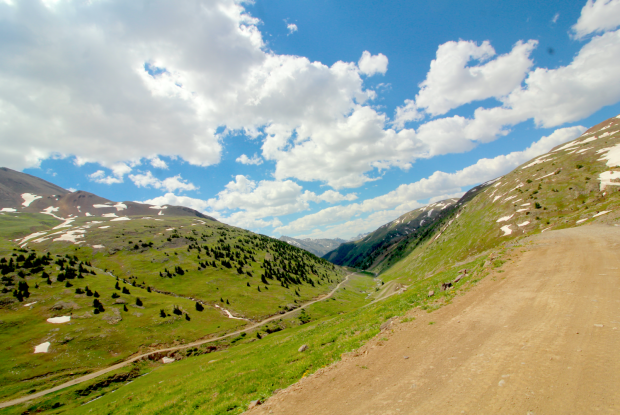 Halfway done. As we crawled our second mountain of the day, I realized I’d exhausted my entire reserve of terror. I was, once again, being jostled violently on a thin mountain shelf, hundreds of miles up.

The only glimmer of light from the scary second mountain climb was the sight of fat mountain squirrels. They were thick, orange, and looked like my guinea pigs. We spotted three or four of them. I hopped out of the car to examine the nest. (I didn’t take this photo, but here’s what they look like, up close.)

“Sometimes called a “whistle-pig” for its distinct call, the yellow-bellied marmot lives in the higher elevations of Colorado.

Marmots store up fat in the fall and then hibernate during the winter. In the summer, they can often be viewed on large rocks and boulders, sunning themselves.”

As we neared the end of our drive, I spotted a marmot on the road.

Who ran over my mountain squirrel? I exclaimed in outrage.

Orange fluff looked up and scampered away to sit on a boulder and look at us.

What was he doing? Was he eating rocks? le beau asked.

Finally, we drifted out of the mountain off-road, and onto the main highway. Our final destination: the tiny home Airbnb. To get there, we embarked on “the most dangerous highway” in the States. Compared to off-roading conditions, though, this highway was delightful. 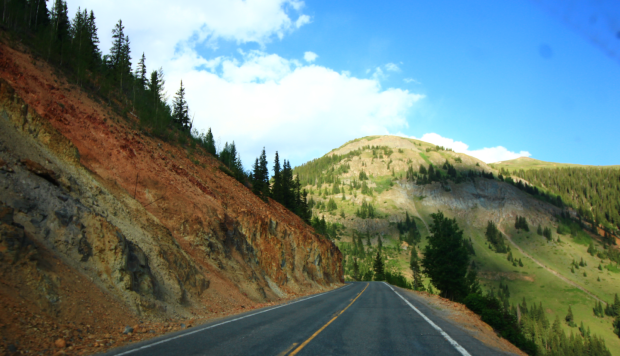 To put things in perspective, this is the image of the “most dangerous” road, pulled from Google. But since we were on the mountain side, and not the cliff side, I welcomed the wide roads, the occasional guard rail, the slow speeds. For the next two hours, we glided past sunshine, forestry and countryside. 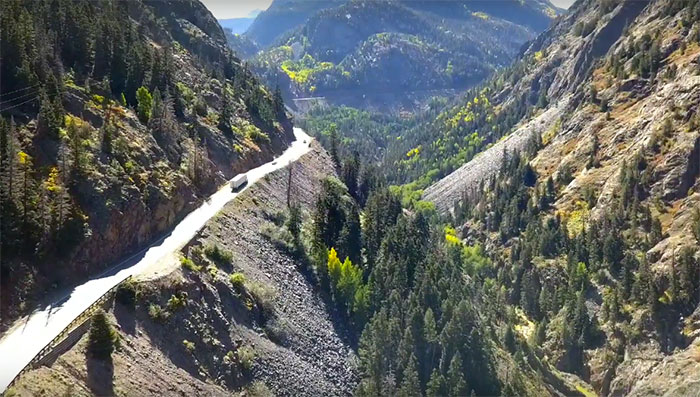 2 thoughts on “Off-Roading In The Mountains”